South African finance minister Pravin Gordhan briefed parliament last week on its mid-term budget policy statement (MTBPS). A fiscal check-up to adjust for the budgeted year, the MTBPS aims to tweak national spending to account for various factors that were not accommodated in the initial budget. For South Africans, the focus of the MTBPS was on higher education and the need to heavily subsidise university tuition. A small footnote in all of this was defence. The MTBPS laid out yet another barrage of bad news: no significant budget increase in the defence fiscal framework, and what appears to be a shifting of R96 million for a transport aircraft lease (read: VVIP aircraft). All of which is bad news for a defence force that is supposed to be undergoing fundamental restructuring, thanks to the Defence Review.

For South Africa, there is no hope of the SANDF continuing the way it has done for the last decade. The military is affected by a three-fold dynamic based on its funding levels, the number of troops in service, and the future requirements laid out in the review.

A recent presentation by Reserve Force commander Maj. Gen. Andersen included the need to maintain “credible combat forces, rapid force generation, trained reserves, strong doctrine, quality training, technology and good morale”. All well and good, but these needs are constrained by the overarching defence structure. If you have too little funding, too many troops, and a poor vision for the future, the training and preparation discussed by Andersen simply won’t matter. And they don’t. Because the South African military is running an outdated playbook.

In the context of global defence spending and broad geospatial characteristics, the nearest country comparison to South Africa’s military is the Finnish Defence Forces. At first glance the thought of comparing a Scandinavian military to that of an African one seems outlandish, but consider the following: The South African and Finnish Defence budgets are broadly similar in Dollar amounts. Second, Finland, like South Africa, has a large maritime domain and airspace responsibility. Third, Finland must maintain several politically-unstable neighbours, chief of whom is a significant military threat (Russia). And finally, Finland just last year finished an extensive defence reform policy programme. In this respect, the FDF has fulfilled what the South African Defence Review could not, and can serve as an excellent example of best practice policy for middle-income militaries.

Given similar budgets, you can immediately see that the FDF possess a very different military to South Africa. For starters, the regular force is less than half that of the SANDF, with a large reserve component. The latter is due to Finland’s use of conscription, providing manpower boosts into the regular force in the event of crisis.

South Africa has an almost reverse situation. A large force of regular soldiers with a minimal reserve component. This puts immediate strain on an already-stressed budget. Reservists, especially those not on active duty, are either minimally or completely unpaid in Finland. Maintaining over 50,000 soldiers’ payroll in South Africa, with benefits ranging from housing to healthcare and their operational expenses is crippling. With a budget at less than 1.1% of South African GDP, this is simply unsustainable.

This is particularly bad when combined with the revised order of battle of the FDF versus South Africa. Take the FDF: 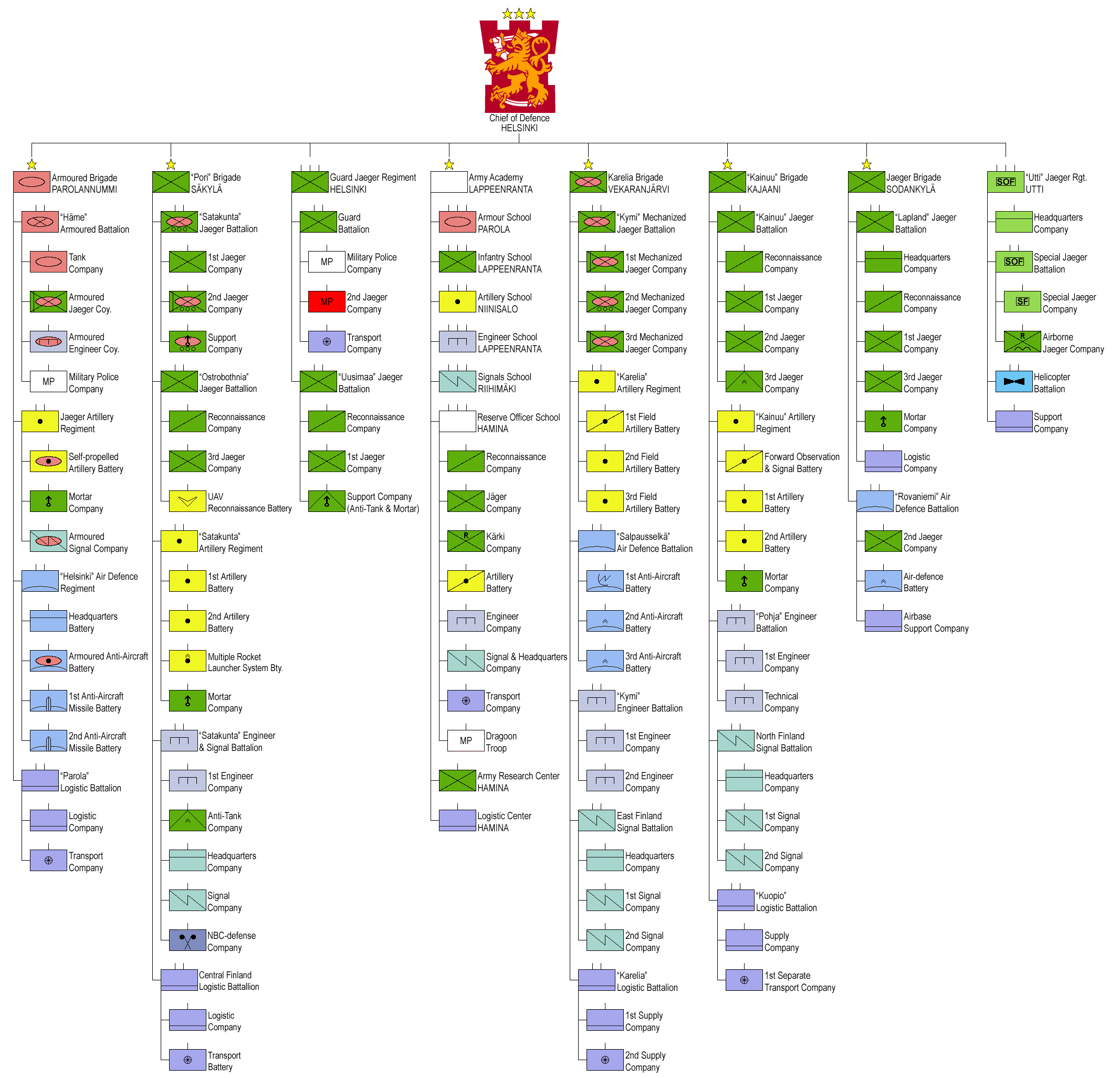 You have a small group of brigades each serving specific purposes in its Army (I have omitted Air Force and Navy here). All brigades are augmented by the requisite support and weapons units needed to fulfill their tasks. A motorised mortar company accompanies a motorised infantry brigade. SOF troops are supplemented with an airborne company, and so on. A brief glance at the FDF would show an ORBAT that tends to make sense.

On the other hand, the South African Army’s ORBAT is as follows:

A compartmentalised, colour-coded mess. And this is for the army alone. Units are organised not according to what would best suit its function as a brigade, but according to either its geographic location or its operational speciality. This was an unfortunate side-effect of the silo approach adopted by the SANDF post-apartheid. While aimed at saving money, it meant that your medics, signallers, engineers, tankers, paratroopers and so on were all completely divorced from one another, resulting in an inorganic mess. In reality it neither saved money nor made any long-term sense at all.

So the defence force is bloated and poorly-organised compared to its nearest budget-equivalent (Finland). There had been a ray of light, however. In 2012 the South African Defence Review first emerged as a clear and intelligent appraisal of just how the SANDF and Department of Defence should be going forward. This policy document, now passed into legislation, except that it had two large flaws. First, it required a substantial and serious uptick in budget for the defence force. Second, it had absolutely no contingency plan in the event that the first hurdle was not be met.

With no budget, and no plan, defence analysts and leadership within the military are searching for a path forward. Short of getting out the begging bowl, nothing seems to be sticking at the national level. Thus, it may be time to consider the harsh reality that the policy, budget, and force levels of the SANDF need a massive overhaul. This is, of course, not politically expedient. Matching the woeful defence budget with a useful force structure similar to the FDF would mean over 25,000 job cuts. It would mean a complete shelving of certain units and the mothballing of many epaulettes in the higher ranks.

However, looking at the Finnish defence reform model, a five year phasing out of the old and introduction of the new is at least possible. Even doubling this to ten years would be a positive step forward. This is because the reality of the SANDF is that to simply plod along in the current climate of underfunding would result in an ineffective, obsolete force incapable of mounting any serious expeditionary campaign for any particularly lengthy period of time. Indeed, even if the budget were to miraculously double tomorrow, the backsliding into inefficiency may already be irreversible.

Put simply, the SANDF has set its sights too high. This was not their fault, given the assurances they received from the then defence minister that money would be found to improve the defence force. But the bar was set too high, and with no alternative policy, too many troops and a minimal budget, the SANDF must undergo drastic reform. This is not to say, however, that South Africa should take a simplistic carbon copy approach of the FDF. The point is more that a functional, affordable defence is possible and that a real world comparison exists. The strategic environment in South Africa sees a country wishing to secure its maritime borders, maintain air supremecy in the region, defend its borders, and mount expeditionary interventions into the heart of Africa. These are not achievable on the scale South African foreign interests desire. Worse still, simply plodding onwards with the existing SANDF framework, using the budget available and the Defence Review as a rudder will simply push the military into further inadequacy in its job description.